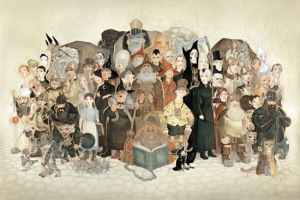 It began by chance, a book sent in error from a club, a blurb that struck a chord, that became a twenty year trek through the wit, the word play, the entendres, the sideways swipe, the unobvious parody, the literal and the Literal musings of a man’s meanderings of a fantasy land. I have no idea why Sir Terry caught my imagination, whether there’s enough reality in the fantasy to hold a ring of truth or I was just entertained.

When two of his books, Wyrd Sisters and Soul Music were made into an animated series, I practically wore the VHS out watching them over and over, the colourful characters firmly in my mind I could see and hear them as I read and reread the books. The dulcet tones of Tony Robinson reading the audiobooks often accompanied sleepless nights.  Later when tomes like Hogwatch, Going Postal and The Colour of Magic were filmed, they were top of my birthday/Christmas lists, staying close to the story, capturing much of the books comedic quality without tipping over into absurdity.

Every one of the forty-one works has had its own flavour, often parodying cliches of religion, science, mythology, folklore, business acumen, dynasties and continents or authors like Shakespeare, Tolkein, Dicken’s and Potter.  A few of his notable characters have burrowed and set up home in my psyche, Granny Weatherwax and Death being the primary.  I can loose hours perusing numerous quotes or mini scenes. Such as (in exaggerated witchy hag voice), “When shall we three meet again”, “I can do next Tuesday” replies Nanny Ogg in her West Country tone; or “On nights such as this, witches are abroad.  Well, not actually abroad. They don’t like the food and you can’t trust the water and the shamans always hog the deckchairs.” In this time of election decisions I’m reminded of Ankh-Morpork’s take on democracy, “Ankh-Morpork had dallied with many forms of government and had ended up with that form of democracy known as One Man, One Vote. The Patrician was the Man; he had the Vote.”

With the death of Sir Terry and the publication of The Shepherd’s Crown, the final novel, something had an end. I delayed reading the book as I wasn’t ready to say good bye to this comforting friend. Last week I took up the book and began. The first few chapters were pure Pratchett even if the content was the death of my favourite character, but after that the book felt disjointed and unpolished. After the epilogue Sir T’s PA Rob added a letter, he told of their working methods and how books came together, but with the last book there had not been the time to fully work on the drafts, although often the final draft had to be crowbarred from his hands as Sir T was ever quite totally ready to say it was complete and done. It’s well known that this is not his finest, but it is his last and maybe demonstrates that despite his failing mental faculties he was determined to write to the end and not leave us hanging.

Farewell Sir T, Granny and all.