I Think I Am Bad For Business! 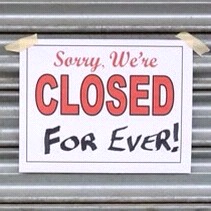 Whilst twiddling my thumbs in the wee small hours, a thought percolated in my noggin. Apart from the last place everywhere I have ever worked no longer exists!

While at school the obligatory two-week work experience was done in the admin offices at the local psychiatric hospital. Many years ago the former naval hospital was refurbished into numerous plush, sought after, town houses and apartments.  During my studies at College to get letters after my name I worked for a period of time at a fabrication business, which was taken over by a larger one and then everything moved away (also the winter snow meant College closed but I still went into work through the snow drifts).  After completing my courses (and getting those letters after my name) I went to work in a section of the Department for Education, hmm, yeah, well, that was partially disbanded and partially amalgamated with other sections.  Off to a speciality advertising agency, if you needed your logo and details printed on things, we sourced it, pens, key rings, clothing, carrier bags, travel adaptors and umbrellas, manic in a word, well it was the eighties.

When that went to the wall, off I hopped to a temping agency, that too no longer exists, nor do the companies they sent me to, from holidays camps, to builders merchants, to security companies, to car sales, to ship chandlers, to law firms, accountants. Some were for a week or two, some were months or longer, most were where the first temp ‘upset’ things so I was the rescue party.

Next stop a Baronial Estate, the job I enjoyed the most, it had the greatest variety. I’d grown up with the family, it certainly topped up my anecdotes supply.  Recently the new 4th Baron (I worked for the third) has decided to no longer operate that area of the various businesses on the Estate, another one closed.

I’d moved on to a couple of companies contracted to work for the Ministry of Defence, both now gone and forgotten.  Finally onto another Government Department section, which is still shuffling the bureaucratic red tape even if the actual building I worked in now has a different function.

Hmm, I wonder where I could put my ‘business black widow’ skills to good use, join the Labour Party maybe or the Trump Administration, how about the banking industry ……….. then again, it might be a wise thing I am now classed as “unfit to work”, I doubt the post brexit economy could cope with me.

7 responses to “I Think I Am Bad For Business!”